It’s no secret that there are plenty of places in the world that, while incredible to explore, aren’t particularly safe for everyone, especially for solo travellers.

From scam artists to pickpockets, civil disorder and gang violence, these popular tourist destinations pose threats that many travellers are not aware of when booking their flight. If you plan a trip to any of these destinations, make sure to tag a friend along or look for another place instead. 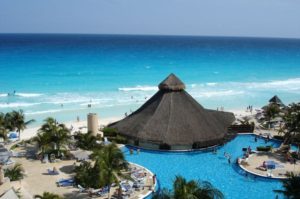 A favourite destination for its wonderful sights, beaches, resorts and cuisines, Acapulco in Mexico is nevertheless one of the dangerous holiday spots for globetrotters. With rising number of drug traffickers and gang violence cases, it’s quickly becoming one of the must-avoid destinations for locals and tourists alike.

One of the sought-after destinations by holidaymakers, Jakarta offers a unique tropical experience. That being said, there are quite a number of threats that can turn your dream vacation into a nightmare. Kidnappings and terrorism in the region are particularly problematic in the last few years.

There are many places in the country have higher crime rates and are more dangerous than Rio. However, since this is the most popular city in the country, it’s worth knowing its safety status. Though the city is generally much safer than a decade ago, street crimes are still prevalent in some areas, especially at night. While you can still enjoy the beaches and resorts, make sure not to be alone when roaming around after sunset. 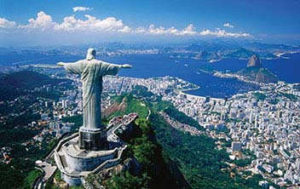 When thinking of India, you’re probably picturing out colourful culture, spicy Indian food and welcoming people. Despite its compelling historical sights, Delhi continues to be one of the top crime capitals of the world, with rape cases skyrocketing in the city.

This tropical and rich country sits on the coastline of Central America. It’s a major attraction due to its lush jungles, ancient ruins, white, sandy beaches and clear turquoise water, which attracts hundreds of thousands of tourists each year. However, the country has incredibly high crime rates, with half of its population living below the poverty line. While its sights make the place worth experiencing, your safety will be at stake if you insist having a Caribbean holiday.

There are numerous reasons to visit Egypt: the vast deserts, the Nile River, the ancient pyramids and the famous Red Sea. However, the country’s political instability easily leads to protests and violent clashes. Also, be sure to know the laws before you visit as it can be a form of illegal act to photograph military barracks, police stations or other public buildings.

As a responsible and smart traveller, it’s vital that you take all the necessary precautions to avoid becoming a victim of any crime. And above all, wherever in the world you plan to go, common sense must always prevail. 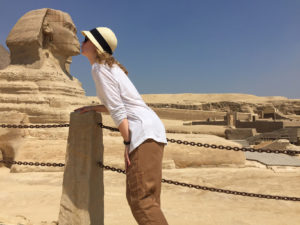 Ever since you heard about Psy’s “Gangnam Style”, you are curious about South Korea particularly a district in Seoul that portray the lifestyle of the rich and the young. Following his song and many others, the world finally knew about Korean pop not to mention Korean drama. That was the beginning of Korea’s increasing popularity.

Today, many Singaporeans are welcomed in South Korea every day. If you have plans on getting there, you should learn about their culture first. Here are some experiences worth your time and effort:

South Korea is indeed a wonder and it is time that you discover and experience it. 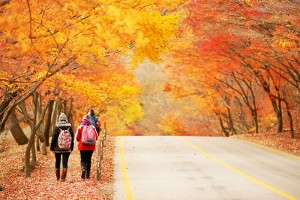 When a foodie travels, night markets are a must to visit. In fact, the experience will never be perfect without it. More than the magnificent sights, you also look forward to having remarkable meals. Eating will show you about the country’s people, culture and heritage. Visiting night markets is truly exciting. 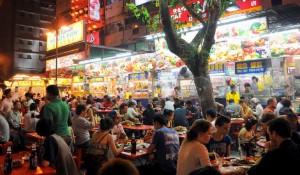 The nearest night market is in Kuala Lumpur, Malaysia. The Jalan Alor Food Street is just nestled in the heart of the capital. You have to know that Jalan Alor is the dinner spot for tourists as well as locals. You will be amazed how the streets animate after the sunset.

Jalan Alor offers grilled seafood, barbequed meats and many more. You will be treated with Malay, Indian, Chinese food and even Western foods. For party goers who want to satiate post-party cravings, the night market caters to them too. They open from five in the afternoon onwards.

If you are visiting Vietnam, particularly Ho Chi Minh city, you should not miss the Ky Hoa Night Market. The night market is near Thong Nhat Stadium. The best thing about this night market is its taste-testing spree. There are many foods that you can try and with every turn, your appetite just keeps getting stronger. 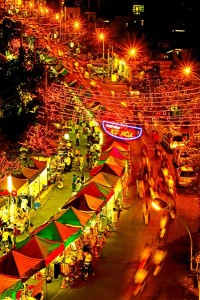 You can try local delights like grilled pork and com tam. There is also bot chien and if it is not enough, you should try exotic fried delicacies. The night market is only open on weekends from five in the afternoon till midnight.

If you already visited the Angkor Wat and went to the capital, why not grab some of their local delicacies at Psar Reatrey. The view is stunning since it sits along the Tonle Sap River. The scenic view plus the music and the food will surely delight all of your senses. You should try local delicacies like fish amok, kuy teav and prahok.

Just at the back of the music stage, you can select other specialties like salted grasshoppers and fried cockroaches. It opens on weekends from five in the afternoon till midnight.

Your Southeast Asia tour will never be complete without Bangkok. If you are in Bangkok, make sure that you visit Rod Fai Market 2. It boasts of good food and cheap shopping. It Is at the back of the Esplanade Shopping Mall. You can visit the night market after going to Thailand Cultural Centre CTS station.

You should try phad thai and tom yum soup. 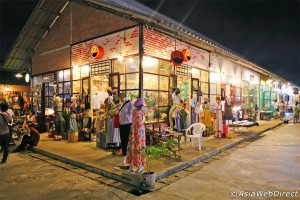 Travelling to the Philippines can be so much fun. This is a country composed of islands so there are numerous pristine beaches and wonderful water forms we don’t always see in Singapore. A lot of foreigners come here for the sole purpose of hitting these famed beaches. Some go for typical beach vacations while others go for surfing and other water sports. Whatever your reason for coming, you’ll most likely find what you’re looking for. 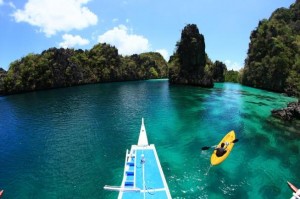 In case you’re planning to visit the tropical island, this is a list of the top beach destinations in the Philippines you must go to:

A lot of foreigners and locals alike love going to El Nido. This beach destination has grown to become world class by its own merit. Beach lovers would love the spellbinding beaches while rock climbers will love the dramatic limestone formations of the islands. You can also join some island hopping tours to visit other beach worthy islands.

This banana shaped island is home to several great beaches. You’ll find the Malapascua Island where divers can enjoy swimming with thresher sharks. If you go southward of the island at the town of Moalboal, you’ll have the opportunity to swim with giant schools of sardines just offshore. Who gets to do this every day?

Southern Negros is where you’ll find white beaches but spend much lesser than you’d do on the other more popular Philippine beaches. Budget backpackers will find this a paradise as they can get very low accommodation, transportation, and overall costs. Escape to the Tambobo Bay, Siquijor Island, or Sipalay’s Sugar Beach to find these paradise treasures.

Boracay is the most popular beach in the country and still the favorite beach destination both for locals and foreigners. This has also become an all-time party beach. It offers countless water sports activities and nightly parties to keep your days and nights in the island well-occupied. 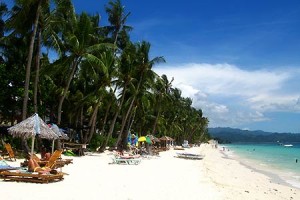 This may be the most difficult to reach to but the beautiful sceneries in Pagudpud beach make it worthwhile for everyone who wants to experience its waters and capture its beauty by their own eyes. This is also where you’ll find Blue Lagoon, one of the beaches with the whitest sand and bluest water.

This is considered as the surfers’ paradise and is the country’s top surfing spot. Those who don’t surf will still find a reason to go to Siargao because of its nearby uninhabited islets with sugary soft sand. 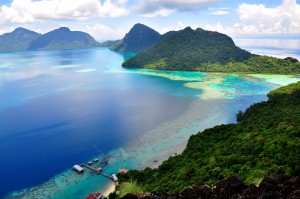 Singaporeans are fond of travelling but not on saving money. This is why we get to travel around the globe and yet still think that we’re not financially prepared for retirement. Saving up for a travel should be something that we get to do as a habit especially if we love travelling a lot. It’s very easy to lose money and more so when you’re having fun. No wonder a lot of travelers find themselves broke every after travel. 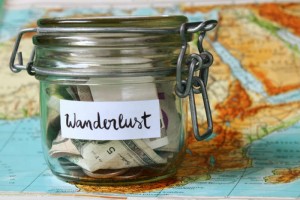 Here are some ways on how to save up for your travel:

You need to level up your financial sense of responsibility by creating a separate fund for your travels. This may be an addition to the funds you’re already saving up for or this may even be your first. Stick to a percentage of your salary that you’re willing to set aside for the sole purpose of future travels and stick to it. You may want to use an automatic savings transfer to make it easier for you.

Sell Items You No Longer Need

Look up all the items that you own. You may find a lot of old valuables that you no longer need or use but are still good enough. How about holding a garage sale in your neighborhood? Or maybe recycle some of these old valuables to make them something new if you have a creative side. Or maybe you can give up some of your valuables so you can save more money. 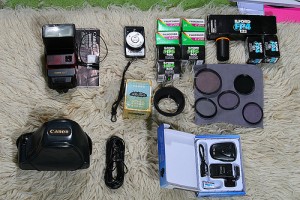 Save on Utility Bills

It’s all about transferring your money on something you’d rather pay for than spend money on what you don’t really need. Check your daily utility consumption. There may be opportunities for you to save up on your utility bills. Maybe you can limit the use of your aircon or save some electricity bills by shutting down unnecessary appliances.

Are you still paying for that gym membership even when you’ve only been there a couple of times for the past year? It’s about time to check on all of the subscriptions you’re paying for. Do you really need all those magazine and newspaper subscriptions? Maybe you can do well without paying for a phone subscription.

This is really all about discipline. If you really want to travel but you’re not making that much money, it’s about time you live below your means. Cut down on eating out and start packing lunch for office meals. Maybe you can also save up by not going to the mall too much. 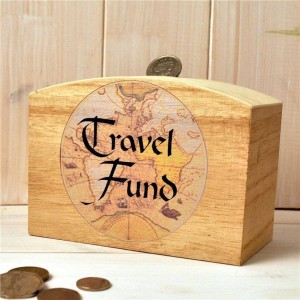